Our friends the robots 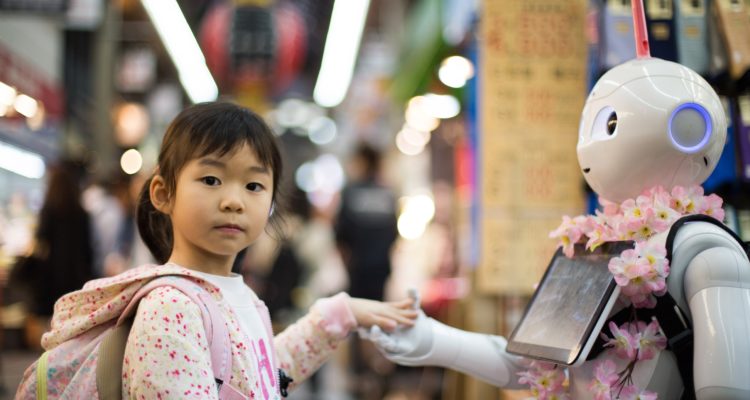 Our friends the robots

BlessU-2 is the name of the first ever robot priest. His body is made out of a discarded bank machine that has been spruced up with plastic parts from a 3D printer. BlessU-2 is programmed to give blessings while raising and lowering its eyebrows and lifting up its arms. The robot gave blessings without taking a breath or breaking a sweat at the international exhibition of the Reformation in Lutherstadt Wittenberg (in Saxony-Anhalt). The pastor made out of metal and plastic had its flock queuing up. Although it is a “work of God” that makes people smile, some believers are asking themselves if it will be the solution for the shortage of priests…

Robot Uli on the farm
In the future, Uli the farmhand will not be a handsome fellow like the actor Hannes Schmidhauser, who played the head farmhand in the 1950s film adaptation of Jeremias Gotthelf’s novel Uli der Knecht. With Agriculture 4.0, robot Uli will help farmers feed their cows without complaining or collecting a pay cheque. Obliging robots do not come from science-fiction films anymore. A patrol of robot cops is going to maintain order at the Expo 2020 in Dubai. With a standard height of 1.7 m and weighing 100 kg, it will be impossible to overlook the stout metal cops. Although they have uniforms and human features, they only have three fingers on each hand—enough for a salute.

Hello, robot
Driven by digital modernity, robotics has already changed parts of our working and everyday lives. Some robots have a human form, others cannot be heard or even seen. A comprehensive exhibition about the opportunities and challenges surrounding robotics can be seen until 1 October at the Vienna Biennale 2017 in Austria’s capital. People’s relationship to the new technology is still ambivalent, especially when the human form appears in robots. The newspaper NZZ also wondered why robots look like humans (28 August 2017): “It is the face (the head and the mind) that continues to represent a human as a whole, and not the torso (or the stomach or the gender), and even less the hands (for working) or the feet (for transporting, exploring and crossing over thresholds). How we will recognise an individual human-machine or machine-human in the future—by its face or by its prostheses—remains to be seen.”

The robot species
Over 20 legal experts addressed the issue of robot law, which does not yet exist in Switzerland, from a Swiss perspective in the law journal Aktuelle Juristische Praxis (AJP) 2/2017 published by Dike Verlag. A robot must master three things in order to belong to the robot species: it must be able to automatically perceive its surroundings, analyse its perceptions, and move or act. In short, it must “sense, think and act”. Robots are categorised as industrial robots or service robots depending on their capabilities. Industrial robots belong to the proletariat, and service robots are used in the service industry, for example in the care or food service industries. Butlers take on many roles in private households: as a simple vacuum cleaner, a window cleaner or a lawnmower. The legal difficulty is creating a clear classification system. Moreover, certain robots are teachable, such as the Robear robot that assists hospital nurses. Melinda F. Lohmann analyses civil law issues using scenarios, such as when the vacuum cleaner goes the wrong way and knocks over a standard lamp, or when the Robear is a bit rough and injures a patient. Who is liable in such situations? The manufacturer, the distributor or even the user? Teachable robots pose a problem for programmers. Their creators never know exactly how they are going to develop—it depends on their environment. A robot sociologist [MZ1] should probably address this question (cf. Melinda F. Flohmann, AJP 2/2017, pp. 152–162).

Can a robot boss fire you?
The lawyer Isabelle Wildhaber acknowledges that the idea that we could report to a robot in the future is not far-fetched. She is examining the duty of care for accidents at work caused by a robot boss. Many people who apply for a job online frequently have to face an HR robot: “e-recruiting” or “hiring by algorithms” is already a part of daily business for large companies such as Swiss, Manor, IBM and Bern’s Cantonal Government. These practices enable organisations to circumvent regulations protecting people against hiring discrimination based on factors such as age, gender or nationality. Except that “firing by algorithms” cannot be done in Switzerland because, according to the Swiss Civil Code, a termination still must still be communicated by a superior who entitled to do so (cf. Isabelle Wildhaber, AJP, 2/2017, pp. 213–224).

Robot criminal law
What will happen if the robot priest gets fed up with giving blessings and becomes an atheist? Who can guarantee that a hacker will not reprogramme a 100 kg robot cop to start a fight at the Expo 2020 in Dubai? These are tricky legal questions, according to Nora Markwalder and Monika Simmler. “Currently, in light of the widely-held understanding of guilt, it is ultimately not yet possible to answer the question of whether a robot itself can be held liable under criminal law” (cf. AJP 2/2017, pp. 171–182). As digitalisation progresses, the boundaries between humans and robots are overwhelming us humans and causing anxiety. The trade association economiesuisse still rejects the idea of robots as tax payers. But when the coffers are empty, the metal proletariat will probably also be asked to pay up… (Berner Zeitung newspaper from 23 August 2017).

Breaking robot news from 29 August 2017
A robot vacuum cleaner set off an alarm at night in an electrical supply store in Lübeck, Germany. Three patrol cars drove to the scene, suspecting a break-in. The police officers searched the store and discovered the robot on the floor. It had evidently fallen off the shelf and set off a motion detector alarm. The robot was not on duty. Who will have to pay for the false alarm?