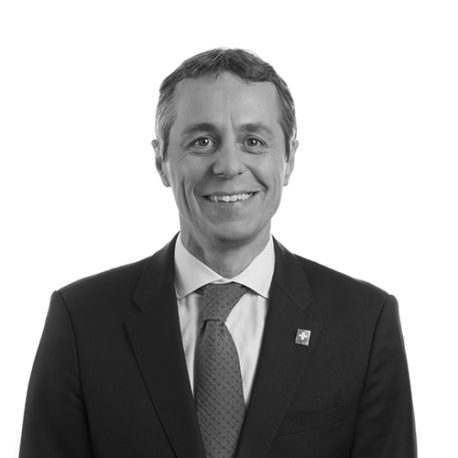 Ignazio Cassis (FDP), elected by the United Federal Assembly on 20 September 2017, took up his post as head of the Federal Department of Foreign Affairs (FDFA) on 1 November 2017.
For the two years prior to his election to the Federal Council, Mr Cassis, a doctor of medicine, was president of the parliamentary group of the FDP. The Liberals, of which he was a member since his election to the National Council in 2007. From 2015, he chaired the National Council’s Social Security and Health Committee. He was also vice-chair or chair of various parliamentary groups. His political career began in 2004 with his election to the legislative authority of the Ticino municipality of Collina d’Oro.
Between 2008 and 2012, Mr Cassis held the office of Vice-President of the Swiss Medical Association (FMH). Prior to that, from 1996 he was cantonal physician for the Canton of Ticino. Between 1988 and 1996 he worked as a doctor.
Since 2001 he has lectured at various universities in Switzerland. He was also a member of numerous foundations and associations. He was the head of the CURAVIVA association (care homes and institutions in Switzerland) and Curafutura, a health insurance association.
Ignazio Cassis graduated in 1998, specialising in internal medicine and also in prevention and public health. Prior to that, he had obtained a master’s degree in public health (MPH) from the University of Geneva in 1996. He graduated from the University of Zurich in 1988 with a degree in human medicine.
Ignazio Cassis was born in Malcanto (TI) in 1961 and is married.